Initially I really felt “no” was the only answer. After all if you are in the space to create relationships and if you are to be valued on your transparency and authenticity, two common value words touted in the space, you can’t be a standin for another company like some kind of digital Cyrano de Bergerac. Can you? Should you? Doesn’t it defeat the purpose? Can you engage for someone else?

It didn’t fit our philosophy of how social media should be delivered. It didn’t seem appropriate. Then we found ourselves tweeting for a client. We never set out to do it. But we were doing it. We were ghosting, tweeting for someone else.

Our intentions were to get the account going, use our experience to build the account, find the appropriate followers, to seed it well while we began training an in house replacement. We built up the account and discovered opportunities which could have easily been lost had we just uploaded a picture and background told the client to be sure to check their @’s and DMs, teach them about hashtags, advanced twitter search, inside and outside lists, strategical syntax and techniques to expand their reach.

Because talking about these things is very different from doing them.


“The law of nature is, Do the thing, and you shall have the power; but they who do not the thing have not the power” Emerson

Our experience in the accounts of our clients has led us to value our activity behind the icon of a client. I would add a few important amendments though. Transparency is important not only for clarity to your followers but to business prospects. "Tweeting out for ...." and introducing a real live human behind an icon is not only appropriate but aids in making real relationships. It's hard to have a relationship with an icon. We don't know what they do on the weekends

How do I reinterpret our delivery model to best serve our clients? 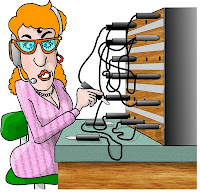 One image I like of a good agency twitter service is that of a Switchboard operator. But this switchboard operator doesn’t just know where to plug in for people, our Twitter Switchboard Operator also knows to plug into keywords and phrases, hashtags, community groups, our TSO knows the keywords, the industry leaders and online influencers as well as connections to the traditional media. It’s not your intern. The ideal Twitter Ghost is part dj and part matchmaker part sleuth and part host, reciprocity is second nature and your message is articulated, echoed and resonates with your team.

But more on that later.

A very quick and easy way to limit the reach of a Tweet is to begin it with an @. 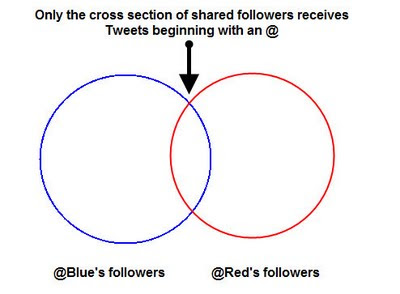 That wasn't always the case. When @Twitter first begin
we could see Everyone's @'s to Everyone.

This is how @'s work @Twitter now,
For example if I were to Tweet out to Darin

@DarinRMcClure are you ready for lunch?

only our subset of shared friends will see that tweet beginning with an @.

Hey @DarinRMcClure are you ready for lunch?

or sometimes you may see a dot used for this very reason.

.@DarinRMcClure are you ready for lunch?